This article will help you understand the basics of motorized linear stage design and specifications. Also, it gives advice on how to select the best stage for your application.

If you are new to the world of linear translation stages, it is important to understand manual linear stages in general before tackling motorized stages. Here is an example of an excellent beginners’ guide to manual linear stages. There are also videos on the website of a motion control technology company, Aerotech, on translation stage basics worth watching as a refresher or reminder.

From here, no doubt about it, you can’t wish it away, motorized linear stages are more complex especially In some of today's high precision environments. Before selecting a motorized linear stage it is imperative to have a clear understanding of the system’s characteristic motion attributes and associated performance specifications. Overlooking a critical motion attribute, such as drift, minimal incremental motion (not resolution!) and repeatability will result in underperforming results, wasted time and disappointment. Then there is velocity, acceleration, torque and inertia.

What is a motorized linear translation stage?

First, this short YouTube video is worth watching that illustrate the multi-axis motion of motorized linear stages.

There’s something about motion, especially on its own that can provide hours of entertainment for some of us…a motorized linear stage is simply a translation stage controlled by a motor to provide the desired point to point translation in either a single or multi-axis coordinate system.

Now let’s get down and dirty in the details…

Replace a human with a machine, repeat a task hundreds of thousands of times in as short a time as possible, error free (mostly), add electronic controllers with programming to make decisions and command action, and move an object with a motor precisely to a pre-determined point and you have a complex system, and as shown in thea above figure, that’s a single axis system. Now add a multi-axis coordinate system such as an XY linear system as shown in the video above. You get the point.

Motion is an easy concept. You jump in your car, start the engine, put the transmission in drive and push on the gas pedal (starting position). The period from 0 mph to cruising speed is acceleration. When you’re driving the speed limit, that is velocity. When you slow to a stop, that is deceleration and you’ve reached your destination (target position).

There are inherent parameters of a motorized motion control system not found in a manual translation stage system that need special attention and it involves motion, moving from point A to point B from a stopped position (zero velocity), starting the motion (acceleration), maintaining the motion (velocity), and ending the motion (deceleration and stop). Then, is it in the correct position? What is the smallest position incremental motion? How much load can be moved accurately without stressing the system mechanicals? 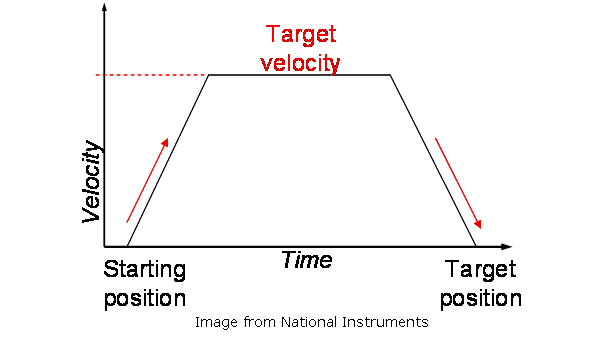 To address these questions, there is system terminology to be aware of in describing the performance of the motion:

» Position Stability: Is the ability of the stage to maintain the set position over a time interval; it is the sum of drift and vibration specifications.

» Drift: The basic definition of drift is “a continuous slow movement from one place to another.” In a motorized linear stage drift is typically caused by temperature fluctuations or lubricants used in the construction. Additional errors related to drift but caused by other outside forces are Hysteresis and Backlash.

» Resolution: In motorized translation stage systems resolution is typically referred to be the minimum step the system can be set to move based upon the encoder. This doesn’t mean the system can actually move or repeatably move this distance. It is better to look for the Minimum Incremental Motion specification and if this specification isn’t available than I would ask the supplier to clarify.

» Minimal Incremental Motion Is the smallest increment the system can move reliable. This s pecification takes into account not only the encoder which is usually the resolution specification but the bearings, actuators, motors, and control system; i.e. the complete motion system. Sounds Complicated? Will it is and the Thesis by Gaurav Parmar title Performance Specifications of Nanopositioning Systems: Accuracy, Precision, and Resolution will give more detail knowledge to understanding how this specification can be measured.

» Repeatability: To calculate the repeatability of a motorized linear stage the test is performed in one direction multiple times. The stage is sent to the same position and the deviation from the actual position is measured. This is different but related to positional accuracy but it is only at a single point instead of multiple points.

Like any high technology product there is a lot of gamesmanship that goes on in specifications. If there is a specification critical to your application and the supplier product specification is close to your tolerance than you may want to dig a little deeper to understand how the specification was created and tested. If you want to learn even more or if you are building your own stage there is an in-depth overview of ISO and ASME standards for motion systems by Newport title Motion Basics Terminology & Standards.

So, exactly what are the components of a motorized motion control system and what do they do?

If this looks complicated, well, it may be at first blush, really though, it isn’t that bad when you gain an understanding of each component and what it does. National Instruments has a good tutorial titled Fundamentals of Motion Control. It goes into great detail on motorized motion control system components and software. The following descriptions of each component are basic and are intended to be just enough to whet your appetite.

What to know even more about the math, physics and science behind motorized motion systems? The Institute of Control Engineering National Chiao Tung University paper on Introduction to Servo System Design can give you a more in-depth understanding. Especially useful if you are trying to design your own system.

Motion Controller; is typically a DSP (digital signal processor) based electronic device acting on its own that converts the software commanded set-points and system parameters into a control signal for the motor driver/amplifier. It also takes feedback signals typically from a servo motor, and/or from the mechanical stage for position awareness and corrects for any errors in intended motion. Why can’t the computer do this you might be asking? For good reason in fact; you would not want your motion system to be interrupted or to stop because your computer system is overloaded with its own tasks such as running antivirus software or the operating system crashes.

Motor Amplifiers and Drives; another electronic device which takes the drive signal and converts it into a motor drive signal which is typically higher voltage/current required to rotate the motor to move the stage carrier. There are several different types of motors to drive linear stages varying in velocity and torque (highly dependent on the load), so you might guess then that motor drives come in many different varieties and are matched to the specific type of motor they drive.

As you would guess, the choice of motor is highly dependent on the application. The two main drivers in motorized linear stage applications are stepper motors and servo motors. Another option is a piezo motor but this is for nanopositioning; you can learn more about How to Select A Nanopositioning Piezo Stage for Your Application. Then, there are brushed DC servo motors and brushless AC servo motors. They are available in a variety of frame sizes offering different torque-speed profiles. Google “servo motor selection” guide and you’ll see a list of guides available to help you select a stepper and servo motor for your application. Variables include operating environment, motor load dependent on the stage type and carrier load, positional accuracy and resolution, positioning distance and time leading to the type of motor and its associated torque and inertia.

What is the difference between servo motors and stepper motors?

Even though stepper motors and servo motors perform the same basic function, i.e., convert a drive signal into rotation of the motor shaft, there are important differences from how they are built to how they work, to cost, to motor output torque and how motor shaft rotational location is controlled (and known).

Stepper Motor; lower cost option. Stepper motors operate just as it sounds, they respond with a step in shaft rotation to a drive signal. These motors are characterized by high torque at lower speeds and lower torque at higher speeds. 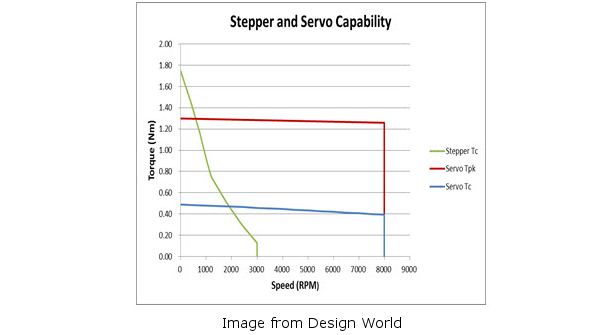 Servo Motor; higher cost option. Servo motors operate in a continuous motion over a limited rotational range, typically 180° with constant torque (mostly). These motors always include a feedback device such as an encoder and require a more sophisticated motion controller and drive amplifier for closed loop operation.

Now for the “I know where you are” part. Stepping motors can run open-loop due to their physical make-up (number of poles), servo motors cannot and need a means of providing information on where the motor shaft is in its rotation. These are known as feedback devices and “close the loop” providing information to the motion controller in the form of an electrical signal. When you watch a motorized stage, especially a multi-axis system it’s amazing to think that the controller knows throughout any range of motion where each axis is in its space. There is a whole technology space in motion control called Feedback devices.

There are a number of feedback devices used on servo motors in motorized linear stage systems, the most common being the quadrature encoder, I know, big word, which gives position feedback relative to a starting point, “home” in motion control terminology. There are absolute encoders as well which don’t require a reference but provide a feedback signal on output shaft position. Another feedback device that’s been around pre-digital era, is the tried and true potentiometer which develops an analog voltage proportional to motor position. And, there are tachometers, you’ve seen them in the dashboard of your car, they provide a feedback signal for the motor shaft’s rotational speed.

And if this isn’t enough, there are hard-wired switches to tell the controller when the stage carrier has come home (or is told to go home), and to tell when it has reached its travel limits. This is called Motion I/O.

These are simple devices mounted on the stage at the characteristic locations along the stage’s carrier travel path and somewhat arbitrary left up to the system designer as to their location. They work by interrupting an electrical signal when open and allow an electrical connection when closed. The motion controller uses this signal to either sense when the carrier is home thus enabling a motion command or to sense a maximum travel limit enabling a stop travel command. 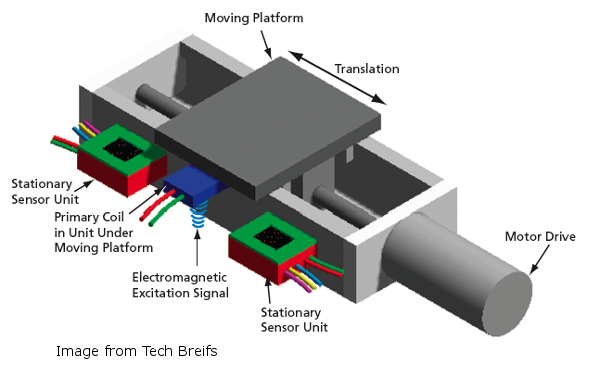 So Where Do you Begin in Finding a Motorized Linear Stage?

First you must understand your application or system requirements including travel range, minimal incremental motion, and any other key specifications of the system. You must also know your load and space limitations. Now the easy part we have created an index that allows you to compare all the manufacturers and their data sheets in one location for motorized linear stages or multi-axis stages like XY motorized linear stages. See us missing a data sheet or supplier? Follow the link below or contact us.

Add a product or supplier to our index