Fiber lasers are a sub-category of diode pumped solid state lasers which utilize a doped optical fiber core as the amplification medium. They contain a spool of fiber optic cable which has a core that has been doped with a variety of rare earth elements from the lanthanide family of the periodic table. Elements such as ytterbium and erbium are commonly used. The fiber doping element is selected and doped into the ultra-pure glass fiber core in order to achieve a desired lasing wavelength and/or power level. continue » 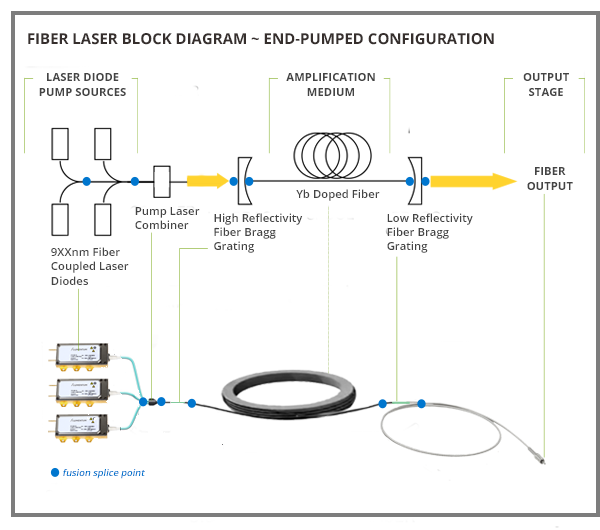 In order to make the doped optical fiber act as an amplifying medium, multiple semiconductor laser diodes in the wavelength range of 915nm to 980nm are coupled (spliced) into the spool of doped fiber. The laser light emitted from the pump laser diodes excites the rare earth ions embedded in the doped fiber core from their ground state to produce high excitation levels This excitation ultimately produces the laser light. This light resonates between Bragg gratings which are placed at each end of the fiber. The light is amplified as it resonates between these gratings. One of the gratings has a lower reflectivity than the other, which allows the laser light which has been created in the cavity (amplifying medium) to exit the fiber. The resultant beam propagates through a high power fiber and out of the fiber laser.

Before getting into the details of how fiber lasers create and deliver their light, it may be helpful to review several key principles of optics and a few of the primary design fundamentals of lasers.

Snell's Law as it Applies to Fiber Optic Cable

Starting from a basic level, when energy is applied to an atom in the form of light, the electrons orbiting the nucleus of the atom absorb the light energy and become excited. In the case of a fiber laser, the most common atom used as the source of this excitation is an ytterbium (Yb) atom. Yb atoms are embedded (doped) into the fiber core in a fiber laser. This excitation of the ytterbium atom electrons forces them to change their energy level from their original ground state of equilibrium to a new, higher energy state. For Yb doped fiber lasers, the energy source is typically a 976 nanometer diode laser pump source. Yb atoms absorb the wavelength 976nm very efficently, which is why Yb is so commonly used as a doping agent. When the energy source is removed the electrons will return to their ground state. When they return to their ground state, the law of conservation of energy is enacted and the excited electrons must release the energy they have gained. This engergy is released in the form of a photon. This newly created photon will have a vibrational frequency and wavelength that is dependent on the energy level at which the photon was released. In the case of fiber lasers, manufacturers typically design their lasers to emit a wavelength of 1064nm or 1030nm: 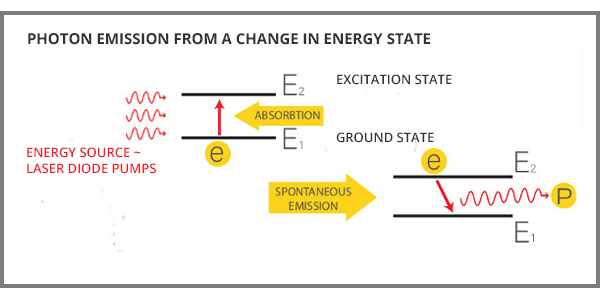 Photon Emission in a Fiber Laser

Having established the basics of how a photon is created in the section above, there are five design principles briefly described below which will give the reader a basic understanding of how all lasers works:

First, a quick refresher on the relationships between frequency, energy and wavelength:

Spontaneous emission occurs when electrons are excited to a point that they change their energy state and release photons. This is explained in more detail in the paragraph above. Stimulated emission occurs when an excited electron is in a higher energy state. Another photon at an energy level equal to the difference between its present level and the lower energy level can cause the first electron to return to its ground state. This causes the release of a second photon of equal energy and frequency. In addition to fiber lasers, this is how all lasers work. All of the photons which are being released are effectively synchronized and are operating at the same wavelength, phase and direction. Sustained stimulated emission means that there are enough electrons releasing photons to maintain a state of ongoing stimulated emission. 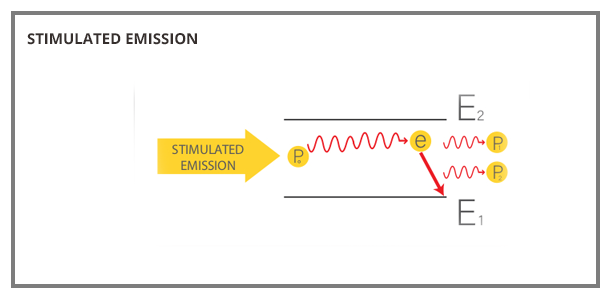 In addition to the principles described above, it's important to understand the principles of population inversion and amplification. Population inversion refers to the population, or total number of electrons, and the change in their respective energy state. Electrons are by default in a ground state. In order to produce the fiber laser light, they must be inverted from their ground state. In order to sustain a state of stimulated emission as efficiently as possible, their needs to be more electrons in higher energy states than at the ground level. The higher the energy level of the electron, the higher the degree of population inversion and the greater the chance of amplified emission. The energy source which is supplied for excitation of the electrons and to create the population inversion in a fiber laser comes from a semicondutor laser diode. This process of transfer of energy is referred to as optical pumping. 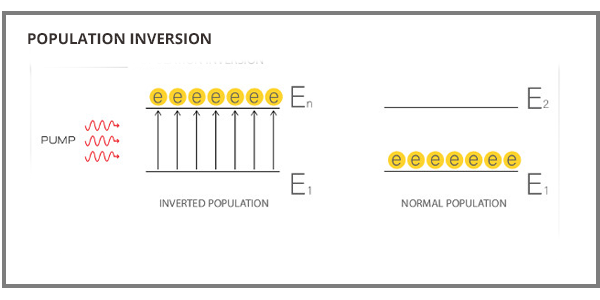 Population Inversion in a Fiber Laser

The final principle, laser amplification, occurs when population inversion and stimulated emission are both present in a fiber laser. When population inversion is achieved, it means that the rate of stimulated emission exceeds that of absorption. This happens when there are more electrons at an excited energy state and more photons are being released from each incident photon. In a fiber laser, this is accomplished by encapsulating the movement of electrons in an optical cavity which is made up of rare earth doped fiber. The doped fiber is also known as the gain or amplification medium. 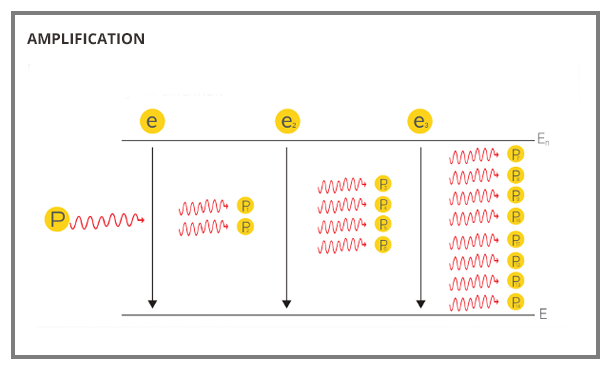 HOW A FIBER LASER WORKS:

Having reviewed the optics and laser fundamentals in the sections above, we can now apply these fundamentals to the fiber laser category to understand how they function. Fiber lasers utilize a doped fiber core as the amplification medium. In order to make the doped fiber act as the amplifying medium, multiple semiconductor laser diodes are spliced into the spool of doped fiber. These laser diodes are referred to as pumps. The pumps are typically in the 915nm to 980nm range and can deliver from 500 milliwatts up to roughly 600 watts of optical power per laser diode. There are typically multiple pump laser diodes spliced into the fiber. 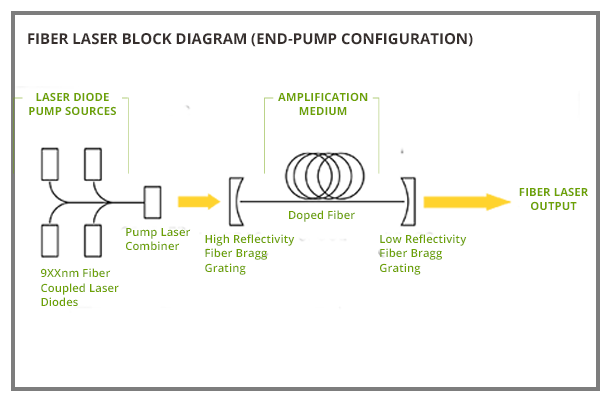 The light from the pump laser diodes passes through a pump combiner which is spliced into the “active” fiber to excite the active element in the fiber core. In this context, “active” refers to the ytterbium doped fiber core and "passive" refers to the non-doped fiber sections. The laser light emitted from the pump lasers excites the electrons of the ytterbium atoms embedded in the doped fiber core from their ground state to an increased energy state. This produces the excitation levels that lead to the spontaneous emission state described above. The electrons are pumped to reach an energy level corresponding to the wavelength of the pump light. Through design, they are then dropped to a lower metastable state. In the case of an ytterbium doped fiber, a photon at 976nm which is absorbed by the ytterbium atom forces the electrons around the atomic nucleus of the Yb atom to move to higher orbitals. This happens because the the electrons have absorbed the 976nm pumping energy.

After transitioning to a higher energy orbital, the excited electrons will drop to their original ground state and emit a photon at a wavelength of 1064nm. This drop occurs on a very short time scale of less than one millisecond. The relationship of the 976nm pump laser wavelength input to the 1064nm fiber laser output is inherint to the element ytterbium. Other wavelengths can also be generated. This National Institute of Health publication describes a 1018nm ytterbium-doped fiber laser ». If the intensity of the 976nm pump light is high enough, the number of electrons in the metastable state exceeds the number of electrons that remain in the ground state. This state represents both the stimulated emission and the population inversion principles. The transition of the electrons back to the ground state causes emission of light with a wavelength corresponding to the energy difference. In this case, a photon at 1064nm wavelenth.

To complete the process of light creation in a fiber laser, the spool of fiber is bound by fiber Bragg gratings at each end. Gratings are described in more detail below. They are essentially mirrors that create a high power resonator when they are placed at both ends of the doped fiber. The longer wavelength light (the 1064nm output) resonates between these gratings. The gratings reflect light at an angle determined by the geometry of the reflecting surface. As the light is bounced back and forth between the two gratings, it is being amplified with every pass. The grating on the output of the fiber laser is partially transparent allowing the longer wavelength laser light which has been created to exit the fiber.

The spool of doped fiber can be from a few meters up to kilometers in length. This allows them to have a very wide output power range and makes them capable of reaching very high output power levels.

We have offered a quick summary of how a fiber laser works and the underlying laser and optics principles. To get a more in-depth understanding, this video from Nufern does an excellent job explaining the basic components and processes:

How a Fiber Laser Works by Nufern 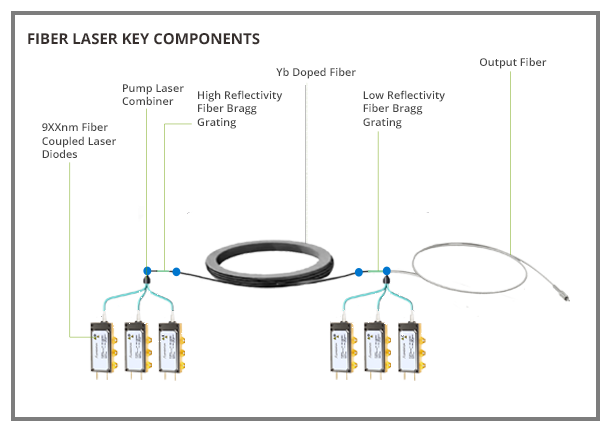 Most fiber lasers employ ytterbium or erbium as the rare earth element doping agent in the fiber core. Ytterbium offers photon emission at wavelengths in the one micrometer range. Specifically, at 1030nm, 1064nm and 1080nm. Erbium is the element of choice to produce an output in the 1550nm range. Erbium offers a range of roughly 1528nm to 1620nm to 1620nm. Pulsed 1550nm fiber lasers are becoming quite common in sensing applications because they offer very high power in the 1.5 micron eye-safe wavelength range. To get output power levels over 5 watts at 1550nm, it is fairly common to use a combination of erbium and ytterbium as the doping agents. In this case, the ytterbium is excited and the energy is then transmitted to the erbium ions.